What does the printing press have to do with student recruitment?

In the latest in our series of blog posts previewing our virtual conference on the future student recruitment, this time we're hearing from our co-founder Nik Higgins.

Our conference takes place on Thursday 4 June and is completely free to join - sign up now to get access to all sessions - live and on demand. You'll find the full lineup in this blog post.

Whenever I read phrases like ‘digital revolution’ or ‘online transformation’ my reflex reaction is to raise my eyebrows. This is my default response to anything that sounds trite, reductive, or like I might have heard as a 12 year old in an Information Technology lesson at school.

I should disclose, upfront, that I am a bit of a history buff. There, I said it.

My problem with the aforementioned phrases are that they, quite artlessly, ignore the much longer and incremental narratives with which change occurs and, instead, pick an arbitrary moment in time to cite as an awe-inspiring inflection point. Frederic Jameson (who just happens to be one of my favourite cultural theorists) identified this as a fundamental tenet of postmodern thinking in the seminal Postmodernism, or, The Cultural Logic of Late Capitalism. It’s well worth a read, but probably beyond the scope of this blog post! To save you the 500 pages of reading I’ll summarise: today, we are bad at spotting that contemporary events aren’t ‘unique’, and we often miss the fact that they are more complex and nuanced reworkings of older trends, processes, and ideas.

There has been a revolution in the way that universities use technology. The thing is, it didn’t start in 2016. It started in the early 16th century. As Gavin Moodie notes in his 2014 essay ‘Gutenberg’s effect on universities’ the most seismic technological disruption to hit institutions came with the invention of the printing press. The whole scholastic culture of the early medieval period was displaced by a single machine. Latin fell out of favour, curricula were expanded, and hand-written manuscripts gave way to printed folios. Basically, it was a really big deal.

The impact of ‘digital’ technologies on universities has, in comparison, actually been fairly modest. Let’s not forget that the computer itself emerged from within a university. I’m writing this blog in Manchester, 6 miles from the site at UoM where Alan Turing built the Small Scale Experimental Machine (read: first computer). The printing press tore apart the fabric of academia and (literally) rewrote the narrative of the university. Digital technologies have changed, augmented, and developed the way institutions work, but they are part of a much longer and richer history and their impact on the actual fabric of academic world has actually been fairly modest.

So what’s my point?

Well, it’s this. First, don’t ignore history, (but that’s just me being a pedant). My real point is that universities, from their most nascent stage, have been theatres of technological innovation and adoption. They just take a bit of time to adapt. Gutenberg didn’t invent the printing press on Monday and see universities transformed by Tuesday. The change took at least 50 years (and probably much longer). What, however, is quantitatively different today is the rate of change, and the speed of the cadence with which technological adoption can happen.

In 2020 institutions have found themselves with a new challenge. Prospective students are physically distanced from the university. Everyone is stuck at home. Universities, already resplendent with technologies, have a decision to make. Will they seize on and sustain their use of new online communities and platforms, or will they revert to type?

Will it be a Gutenberg transformation, and take years? Or is now the moment?

But you never know, now might just be the time...

Nik will be hosting some of our conference sessions this Thursday - don't forget to book you free place now! 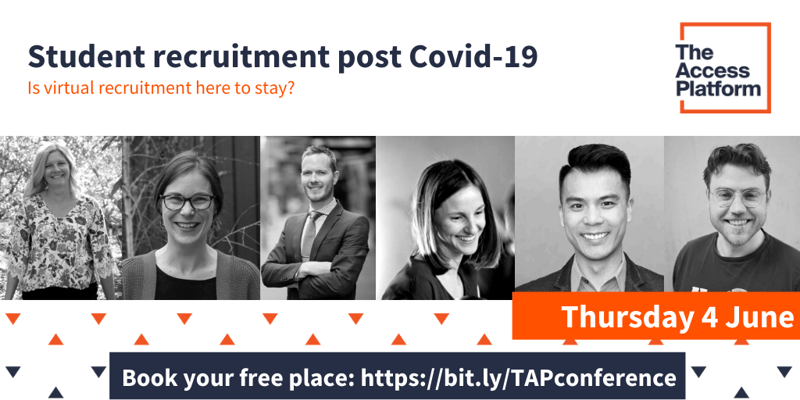 How to improve dialogue between student recruitment and widening participation